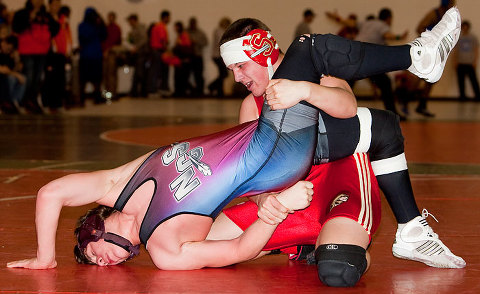 Wisconsin Wrestling Online released their latest individual rankings today and the division two 215-pound weight class once again finds a Tourdot at the top.  Tom Tourdot moved up two spots into the top ranking at 215 pounds.  A slew of area wrestlers fill the division two rankings and will challenge Tourdot for a trip to state.  At 2nd in the rankings at 215 is Viroqua’s Trent Vesbach followed by Richland Center’s Logan Schmidt at 5th and Adams Friendship’s Tyler Burrows at 9th.  Vesbach and Burrows will be in the same regional as Sparta.

In about a week’s time, Tourdot will have his hands full with Aquinas’ Lucas Shappell who moved up to third in the division three rankings in the latest poll.  Last year, Steven Stevenson pinned Shappell in 3:21 at 285 pounds during Sparta’s dual against Aquinas.

Let's Get In Touch!

Ready to start your next project with us? That's great! Give us a call or send us an email and we will get back to you as soon as possible!